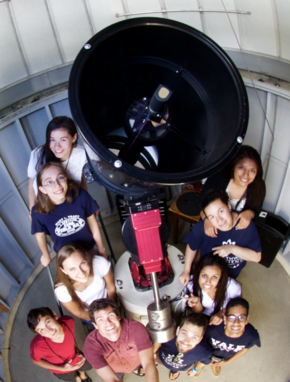 Students at YSPA work in teams of 4 on an astrophysical research project that requires them to get data using telescopes at the Leitner Observatory (LFOP), such as our 0.4-meter Ritchey-Chretien Telescope shown here to the right, as well as from remote observatories in New Mexico, California, Chile, and Australia. Once students have sufficient data, they use the python programing language and scientific python libraries to make a model that best fits and explains their data.

The specific research project at YSPA changes in some years, but in 2020, all students will work on modeling the explosion of an extragalactic supernova that is happening during the four weeks of the program.  Supernovae (SNe, for short) are extremely powerful and luminous events that signal either the death of a massive star or the obliteration of a white dwarf stellar remnant in a binary system. A supernova can be as bright as an entire galaxy for a few weeks, and many of them can be seen from hundreds of millions of light years away with optical telescopes such as the 0.4 meter at Yale. The study of supernovae has led to many advances in astrophysics and cosmology, such as the discovery that the expansion of the Universe is accelerating, which was recognized with the Nobel Prize in Physics in 2011.

Image of the Crab Supernova Remnant, a star which exploded in 1054 AD, taken at the Leitner Observatory

Students at YSPA 2020 will make photometric and spectroscopic measurements of new supernovae discovered by automated SN searches over the four weeks of YSPA 2020, then they will model the explosion of the supernova using numerical radiative transfer techniques. From these data, they will be able to estimate the peak luminousity of the SN, the type of star that exploded, and the distance to the SN and host galaxy. Each team’s photometric results will be published for use by other astronomers via the AAVSO database.

Image and spectrum of Supernova 2014J in the galaxy M82, taken by Yale students at the Leitner Observatory

In addition to the main research project on supernovae modeling, students will also work on several smaller projects with their own original data, such as determining the distance to and age of a galactic star cluster, modeling the spectral emission lines from Wolf-Rayet stars, and measuring the rotation rate (and therefore the mass) of the Milky Way Galaxy.

At the end of the program, each research team will write a report on their project in the form of a scientific paper and they will present their results at a mini-conference where they will get feedback from the faculty and other students.

After YSPA, some students may want to continue to work on their research project and expand it for a science fair or talent search program or as a senior capstone project at their high school. Some projects may turn into published papers in refereed science journals.